← more from
Geographic North
Get fresh music recommendations delivered to your inbox every Friday.
We've updated our Terms of Use. You can review the changes here.

Love is the Capital 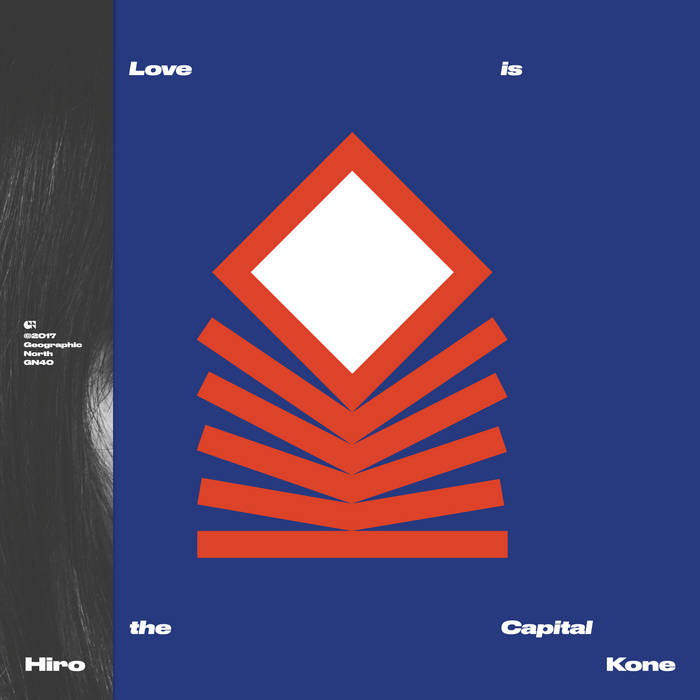 harken23 Rukhsana is one of the most amazing pieces of music I've ever heard.

Dotflac Old school vibes and familiar vocals stand alongside dissonant atmospheres and staggering rhythmic parts, as direct symptoms of a visceral need to look behind us for what we know and find comfort in, and the unfading fright of what is to come and can already expect from this uncertain future.

The eight tense tracks are in consequence perpetually walking on the thin rope separating our ultimate solace and our unstoppable fall among the demons of the present, foretelling more clearly the latest. Favorite track: Less Than Two Seconds.

'Love is the Capital' the debut LP by Hiro Kone, the recording alias of Nicky Mao. The album is a follow-up to the incredibly well received 'Fallen Angels' cassette, bringing with it some of Mao's most emotionally and politically driven work yet. It is Hiro Kone’s long coming opus, examining a number of all-too-relevant themes: capital, the state, egoism, anxiety, and steadfast optimism.

The eight songs on 'Love is the Capital' highlight Mao’s austere, politicized techno battling for the greater good. Songs are visceral meditations of rhythm, noise, and melody in the vein of Pan Sonic, Chris & Cosey, Muslimgauze, and Kangding Ray.

The sounds were often recorded in scenes of isolation, whether physically or emotionally. “Infinite Regress” was during a trek with Roxy Farman (Wetware) up to the sleepy, upstate NY town of Palenville. There, frozen in a cabin with the most DIY of recording booths, Mao recorded Roxy’s vocals and what would be the track that would put into motion the entire album.“Less Than Two Seconds” was written in a single afternoon in late December 2015 when it was revealed that the grand jury had declined to indict the police officer who shot to death 12-year old Tamir Rice.

The taut techno, industrial minimalism, and aural upheaval is embedded in tracks “Rukhsana” (featuring Drew McDowall, formerly of Coil & Psychic TV, on modular synthesizer), “The Place Where Spirits Get Eaten,” and “Less Than Two Seconds,” an emotionally wrought blitz of serrated Monomachine tones flanked by timeless recordings of essayist, poet, and social writer James Baldwin. Mao ventures deep into heady, prismatic runs of hypnotic techno, on “Don’t Drink the Water” and “The Declared Enemy.” On opener “Being Earnest” and “Love is the Capital,” foreboding motifs brood their way back into the narrative.

Still, the album maintains a sense transformation, burdened with an alien tension– the awareness of an impending and necessary collapse. And what may come next.